Fishery biologists and landowners are thrilled by the sighting of the first spawning coho salmon in Devil Creek, part of the East Austin Creek Conservation Bank, last winter resulting in numerous offspring this year (see video and photos listed below). The federally protected salmon returned just months after habitat improvements were completed in the stream, providing heartening news for recovery of coho salmon in the Russian River watershed.

In August of 2010, NOAA Fisheries Service approved the East Austin Creek Conservation Bank designed to permanently preserve and restore 440 acres of prime habitat for the preservation and recovery of federally endangered Central California Coast Coho salmon and threatened steelhead. In September, 15 large natural wood structures were placed in the water for fish habitat and by January, 2011 over 700 trees, including over 300 redwoods, were planted along the creek.

In December, less than three months after placement of the woody debris, two adult coho salmon and a young precocious 2-year-old (jack) were observed in Devil Creek. The female had a clipped adipose fin indicating it was from the Don Claussen Warm Springs Hatchery and part of the Russian River Coho Salmon Broodstock Program. The adult male was apparently wild. The two adult salmon successfully spawned and offspring were observed in the spring of this year.

A conservation bank is a free-market enterprise that offers landowners an economic incentive to protect, preserve and restore habitats for protected species. The conservation bank landowner banks habitat “credits” that may be sold to developer groups, state and local government agencies, and others to compensate for their adverse impacts to threatened or endangered species caused by development.

The East Austin Creek Conservation Bank is located in the lower Russian River drainage and adjacent to the Austin Creek State Recreation Area; an area with perennial flows of cold water that provides good habitat for salmon and steelhead, particularly during the critical summer rearing period. The location of the bank is designated in the draft Central California Coast coho salmon federal recovery plan as a “core recovery area;” the highest priority site for habitat restoration and preservation for critically endangered coho salmon. 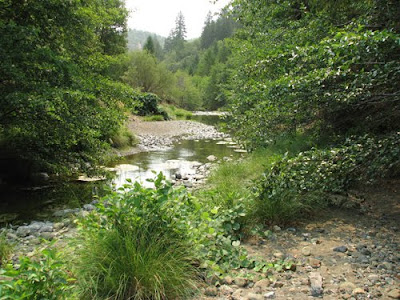 The bank owner, Nancy Summers, is conducting extensive restoration work and is also providing habitat for young coho salmon produced from broodstock raised in captivity by the collaborative Russian River Coho Salmon Captive Broodstock Program. The landowner has allowed program staff access to the bank property for in-stream habitat monitoring, spring out-planting of coho salmon this year, monitoring of adult returns and possible additional out-planting in later years. This represents significant collaboration of agency and landowner to conserve endangered species. The preservation and restoration of the property will also have ecosystem benefits by providing habitats to many of the rare and endemic plants and animals that depend on these habitats to thrive.

The Russian River Coho Salmon Captive Broodstock Program represents a broad partnership involving the Department of Fish and Game, National Marine Fisheries Service, the Army Corp of Engineers, the Sonoma County Water Agency, University of California Cooperative Extension, Sonoma County and many private landowners. The group carefully captures juvenile fish, rears them to adulthood at the Don Claussen Warm Springs Hatchery, and spawn coho broodstock. They then release the offspring as young fish in select tributary streams and monitor their growth and survival until they move downstream and into the Pacific Ocean. In November, 2010 over 5000 young coho salmon were released on the East Austin Creek Conservation Bank property.

On the Web:
Video of coho salmon spawning in Devil’s Creek
http://swr.nmfs.noaa.gov/media/devil_spawn.htm