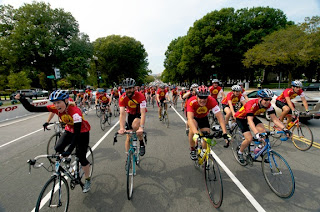 “All of us at BikeSonoma,” says BikesSonoma Executive Director Gary Helfrich, “are grateful and thrilled to be chosen as a Climate Ride beneficiary. It is an honor to be a part of this high-profile, national event. Plus, it offers a rare opportunity to raise unrestricted funds to support BikeSonoma’s efforts to make Sonoma County an even better place to ride your bike.”

The Climate Ride was founded to inspire and empower citizens to work toward a new energy future. Climate Ride events raise money for a collection of innovative organizations, including BikeSonoma.

The ride, from October 2 -6, 2011, begins in Fortuna and travels south, ending in San Francisco. The 150 riders will be in Sonoma County on October 4th and 5th. Riders are expected to camp in Duncans Mills on the 4th, and to stop for lunch in Sebastopol on October 5th before pedaling on to Olema.

Team BikeSonoma’s current fundraising goal is $17,600 (the goal will increase if more members join the team), and the five members have raised half of that amount so far. Team BikeSonoma members are:

Andy Bunnell, of Graton, is an experienced cyclist and runner who has completed a variety of long bicycle rides, races, as well as marathons. Andy works with at risk boys as a social worker.

Jane Kurtz, of Graton, is a life-long athlete who has participated in many long bicycle rides and some races. She’s a handyperson and a founder of the Graton Community Garden.

Ellen Bauer, of Forestville, bicycled across the United States after graduating from college in the 1980s. She has continued to have an active lifestyle while raising a family. Ellen works for the County of Sonoma’s Department of Health Services.

Drake Pitts, of Santa Rosa is the newest member of Team BikeSonoma. He is a Santa Rosa native, and a 19 year-old student at Santa Rosa Junior College. He was inspired to join the Team after hearing about the Climate Ride at BikeSonoma’s Northern California Bicycle Expo on August 20th.

Sandra Lupien, of Graton, is the Outreach Director at BikeSonoma. She is the Team Captain, and the least experienced cyclist on team BikeSonoma. Lupien has been a dedicated bicycle commuter since 2003, but until recently had not ridden any long distances. Since signing up for Team BikeSonoma, she’s been training, and recently completed the 65 mile route on the Tour d’Organics.

“I am completely inspired,” says Lupien, “by the dedication of my teammates! Their passion for cycling and for BikeSonoma’s cause is incredible. I’m nervous about all those miles – and those hills, too, -- but I know my teammates – and the support of the community -- will pull me through.”

The Climate Ride is the first bicycle tour where pedal strokes help raise money and awareness of a future powered by renewable energy, sustainability, and a green economy. The ride offers people who share a passion for green living and cycling a chance to journey toward making a difference.

BikeSonoma plans to use the funds raised on the Climate Ride to launch a Countywide, ongoing series of family-friendly bike rides.

Team BikeSonoma is holding a benefit concert featuring the danceable band “Free Peoples” (www. freepeoples.com/) on Friday, September 9th at 7:00 p.m. The event will be at Cahill Winery (5450 Ross Road, Sebastopol), which is accessible by bicycle from the West County Trail. Beer and wine will be available for purchase. Tickets are sliding scale $10 - $25. For information, call 707-545-0153.