Bicycles Around Sonoma County & Our History 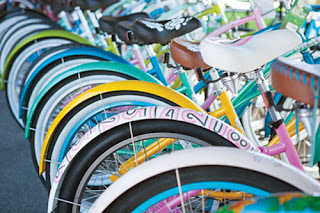 Sonoma County Museum (SCM) presents an in-depth look at the development of the art and history of the bicycle and its relationship to Sonoma County. “Customized: The Art &  History of the Bicycle” exhibition covers over one-hundred years of the bicycle and its evolution as a human-powered vehicle. Focusing on the significance of the bicycle in northern California, the show traces regional innovations with respect to bicycle racing and mountain biking, political issues surrounding bikes and the green movement, and art bikes and other two-wheeled inventive creations.

As part of exhibition, the Museum will present an on-going original film about bicycles in Sonoma County and Northern California. The film will feature interviews with some of the region’s biggest names in cycling including Levi Leipheimer, Tom Ritchey and others. The twenty minute film was created by Jamie Tuell and Daydreamer Cinema, in collaboration with the Sonoma County Museum.


“Customized: The Art & History of the Bicycle”, explores the remarkable evolution of the bicycle, many of its past and current adaptations, and how Sonoma County has become one the greatest cycling regions worldwide. From a 1903 race between a Santa Rosa cyclist and a train, to the invention of the purpose-built mountain bike in nearby Marin County in the 1970s, to the 2011 Tour de France victory of Santa Rosa based cycling team BMC, this part of California carries a significant bicycling legacy. “Customized” features bicycles including a 1860s velocipede, classic balloon tire children’s bikes of the 1940s and 50s, an early customized mountain bike, one of the most advanced road racing bikes, and many others. “Customized” also features the work of the region’s top, custom bicycle builders, and the creations of local artists who have taken customization and tinkering with the bicycle to its creative extreme.


SCM has scheduled a number of exciting special programs to celebrate this exhibit:

“Customized: The Art & History of the Bicycle” runs through February 5th, 2012. Visit the Museum’s website for more information about the exhibit and its special programs: www.sonomacountymuseum.org.